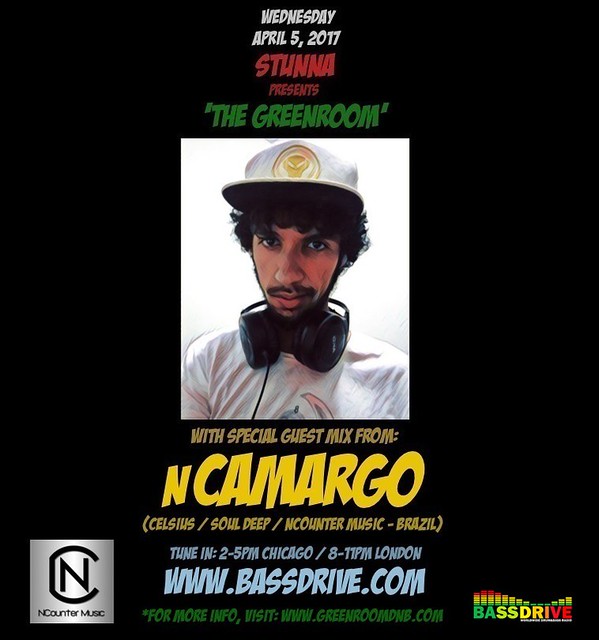 On WEDNESDAY, APRIL 5, 2017, STUNNA kicks off the new month with a very special edition of 'THE GREENROOM' on BASSDRIVE Radio. In this week's installment, we're treated to an exclusive guest mix from a talented producer and DJ by the name of nCAMARGO.

Since his birth in 1994, BRAZILIAN-based nCAMARGO (aka NICOLAS CAMARGO) has surrounded himself with a vast array of musical influences. Discovering a focused interest in electronic music in 2000, a few years of development and exposure would lead him toward a genre that fascinated him: DRUM+BASS music. Being an avid listener of BASSDRIVE Radio around the year 2009 would eventually lead to his entrance to the D+B production ring in 2010.

With a burgeoning discography of finely-tuned, polished productions, nCAMARGO has developed his own sound in the past seven years and turned a lot of discerning heads his way during the process. Highly regarded releases on labels such as SOUL DEEP RECORDINGS and CELSIUS RECORDINGS gave him the confidence and drive to launch his own NCOUNTER MUSIC imprint in 2016. Truly a firm 'GREENROOM' favorite as a producer, we're proud to have nCAMARGO present his first guest mix made especially for this program.

Join us this session as nCAMARGO showcases his own productions as well as other tracks from global producers currently doing the rounds. Tune in!!

*For more information on nCAMARGO, visit: