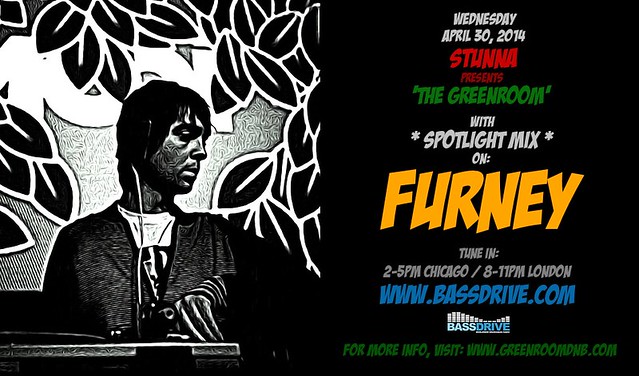 SEASON 9 of 'THE GREENROOM' kicks off in grand style on WEDNESDAY, APRIL 30, 2014 with the next artist 'SPOTLIGHT' mix taking over the airwaves on BASSDRIVE radio. With past long-form programs featuring the work from artists ASC, BACHELORS OF SCIENCE, DAVE OWEN, DIRRRTY B/BLUE MOTION, DUOSCIENCE, ICR, KJELL, LENZMAN, METHOD ONE, NAIBU (two volumes), NUSENSE, SABURUKO, SOL ID, SPECIFIC, STYLE CONTROL, SUBMORPHICS (two volumes), THE FIX/COUNTERWEIGHT, THEORY, TIDAL, and WILL MILES, the 23rd edition features one of DRUM+BASS music's most prolific producers to date: FURNEY.

Having found a home for his music over the years on such labels as 31 RECORDS, ADVANCED, AMA SOUNDS, BIOS, BLACK REFLECTIONS, CAMINO BLUE, C.I.A. DEEP KUT, DIGITAL BLUS, GOOD LOOKING, JAZZSTICKS, LIQUID V, PHUZION DIGITAL, RED MIST, SHEER VELOCITY, SOUL DEEP, SOUNDTRAX, SUPER8SOUND, and TELLURIC, FURNEY has risen to the upper echelon of prestigious producers in DRUM+BASS music. His DJ sets are renown for the inclusion of his newest original tracks, collaborations, and remixes (many of them unreleased and forthcoming). FURNEY has performed around the globe and has many upcoming high-profile projects set to drop in the near future.

Join us as STUNNA takes a 3-HOUR journey looking at the impressive catalogue of FURNEY's creations: past, present, and future. Tune in!!!

**For more information on FURNEY, visit: