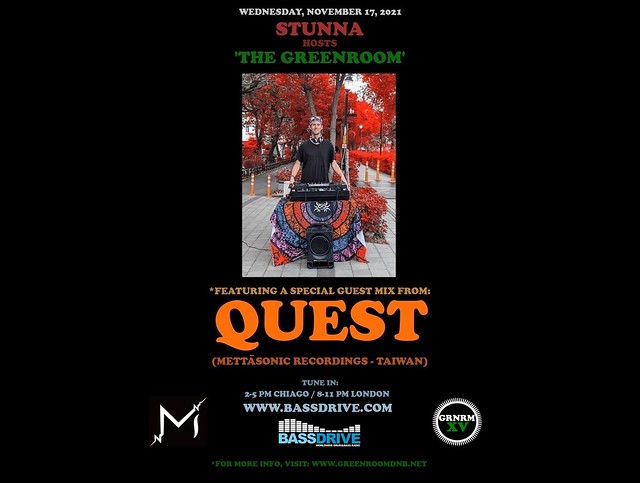 On WEDNESDAY, NOVEMBER 17th, STUNNA moves deeper into the month of broadcasts inside 'THE GREENROOM' on BASSDRIVE Radio. In this week's session, we're treated to a debut appearance from the force behind the revered METTASONIC RECORDINGS imprint: DJ QUEST presents a special showcase mix on his label's music.

Originally hailing stateside from VIRGINIA, QUEST (aka JESSE WARREN) grew up on classic 90s HIP HOP. After moving to CHINA and feeling a void, he founded SHENZHEN’s first underground monthly in 2008, FRESH CREW in 2010, MUZIKBOX in 2014, and finally METTASONIC RECORDINGS in 2017. The label focuses on the deeper and melodic side of JUNGLE, while also shining a light on great local producers around EAST ASIA. The burgeoning imprint has seen strong and well-received releases from the likes of TIM REAPER, RAINFOREST, DAVID LOUIS, KRAY, MAIDABLE, NECROTYPE, AMALGAM, and STUNNA.

After moving to TAIWAN in 2019, QUEST launched both MUZIKBOX SOUNDSYSTEM and INNER CITY DISCO in 2021; both a big success on the remote eastern coast. He has been busy at work on the beats lately, with about 3-4 new albums near completion. A life-long record collector dedicated to both the classics and the cutting edge of dance music, QUEST loves building ragtag sound systems in the Jamaican tradition. Recently, his main focus has been his own original live sets: CHILL TRAP, DANCEHALL, TRIBAL DISCO, HOUSE, and eventually, DRUM+BASS.

Please join us this edition of 'THE GREENROOM' as QUEST presents a special mix highlighting his burgeoning METTASONIC label's overlooked moments thus far.

A few words from the man himself about his label feature mix...

"One of the cool things about running a label is that I love everything we release no matter how many times I listen. Usually when making a mix of METTASONIC tunes I'm choosing a lot of the same ones - the standouts. But for this one, I wanted to highlight the lesser known songs that may not have gotten the same attention. Big up all the producers and worldwide JUNGLE/DRUM+BASS massive!."

*For more info on QUEST, visit: