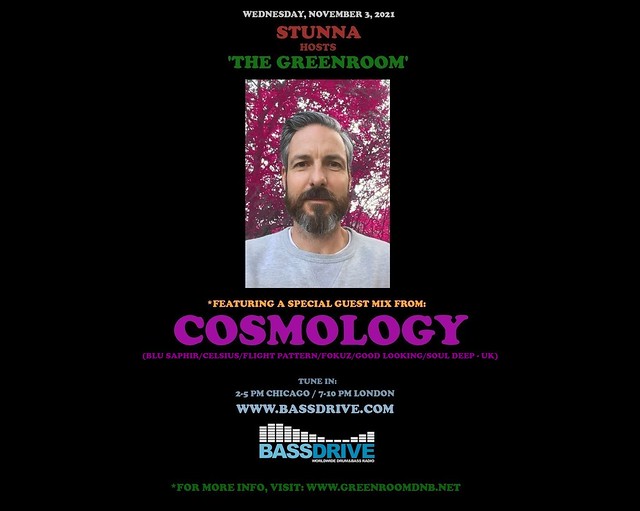 On WEDNESDAY, NOVEMBER 3rd, STUNNA launches into a new month of fresh broadcasts in 'THE GREENROOM' on BASSDRIVE Radio. During this week's edition, we're treated to a debut guest mix from seasoned selector and producer COSMOLOGY, as he makes his inaugural appearance on the program.

A few words from the man himself...

"Growing up in rural OXFORDSHIRE, UK, it was my dad playing guitar in a local blues band and his record collection that introduced me to the world of music. I took piano lessons at the age of 12 but soon moved on to playing drums for a band at school which seemed much more fun at the time! I was introduced to what we now know as DRUM + BASS later on at secondary school through a DJ RATTY tape my brother brought home one day and the raving years began. It wasn’t until quite a while later, with the culture now fully absorbed that I considered making my own music.

I picked up a MIDI keyboard which came bundled with CUBASE LE in 2008 and started from there. In 2009, PLUSH RECORDINGS got in touch and asked if they could sign one of my tunes, "THERE'S A SAYING," after listening to it on MYSPACE. Not long after that, they commissioned an EP, and tunes from that were picked up and supported by a number of DJs including ASHATAK and STUNNA. Looking back now, I think that EP was trapped inside me, waiting to come out, and it has a lovely sense of freedom of expression and encompasses many different styles of DRUM + BASS music.

Following on from that, I have had tunes signed to a number of labels including PHUZION DIGITAL, DIGITAL BLUS, SOUL DEEP, LIQUID DROPS, LIQUID TONES, DNBB, BINARY FEEDBACK, STOREJAM, and a collab with PHAT PLAYAZ on FOKUZ RECORDINGS. In 2013, I was fortunate enough to have a vinyl release on GOOD LOOKING RECORDS, alongside the very talented ENEA, owner of BEATALISTICS RECORDS. I still send music to LTJ BUKEM, and he has supported a good number of my tunes since then.

In 2016, I had a two-tracker on BLU SAPHIR RECORDS which did really well for me at the time. It was the first of my tracks of what I would say is now my signature style of AMEN drums, 808 bass and looped and filtered piano chords. One of the tunes has vocals from ELLA SOPP, who I was lucky enough to be able to work with. BUKEM was the first to pick these up and support followed from DJs including NOOKIE, EZ ROLLERS, and INTELLIGENT MANNERS. This led to a collab with ANTHONY KASPER which was released on CELSIUS RECORDINGS at the end of FEBRUARY 2016. The track was supported by DJs including MARKY, INTELLIGENT MANNERS, STUNNA, and VELOCIT on the HUMAN ELEMENTS podcast and led to another release on CELSIUS on the same EP as RANDOM MOVEMENT and SATL.

Since then, I’ve managed to be pretty consistent with my releases. Highlights have included a collab with SHODAN and ELLA SOPP which got remixed by the mighty ZERO T and a collab with the legendary DJ SS. Lately, I’ve had another release on DIGITAL BLUS which was supported by HIGH CONTRAST, an EP on SMOOTH N GROOVE RECORDS with my friend G-REG, and one on SOUL DEEP. I had my own EP on INFLUENZA MEDIA which was showed love from the likes of DANNY BYRD, and DJ MARKY, and now I’m lucky enough to be releasing a track on the label owned by one of my DRUM + BASS heroes, RANDOM MOVEMENT's FLIGHT PATTERN RECORDS imprint.

I’d say I’ve certainly developed my own style of DRUM + BASS over the years, which is mainly dictated by my production processes in the studio. I tend to have a habit of focussing on AMENS and 808 bass, which harks back to the glory days of the 90s which was such an inspirational time for me. I rarely set out to make a track with a particular idea behind it and often fully re-work my tracks in the constant striving for deepness. If a sample or sound isn’t absolutely right, then it’s getting canned, I’m my own worst critic. Saying that, when the vibes are right, I love nothing more than rolling with an idea which is when the most fun can be had!"


Join us this session of 'THE GREENROOM' as COSMOLOGY drops an exclusive guest mix featuring his own creations alongside various tracks doing the rounds globally. Tune in!

*For more info on COSMOLOGY, visit:

*Due to the ending of DAYLIGHT SAVINGS TIME in the UK and EUROPE, for this week only, listeners in, for example, LONDON, will tune in ONE HOUR EARLIER (ie: 7-10pm instead of the usual 8-11pm timeslot). Listeners in NORTH AMERICA will not be affected, as they will catch up the following week when they turn their clocks back on NOVEMBER 7th.