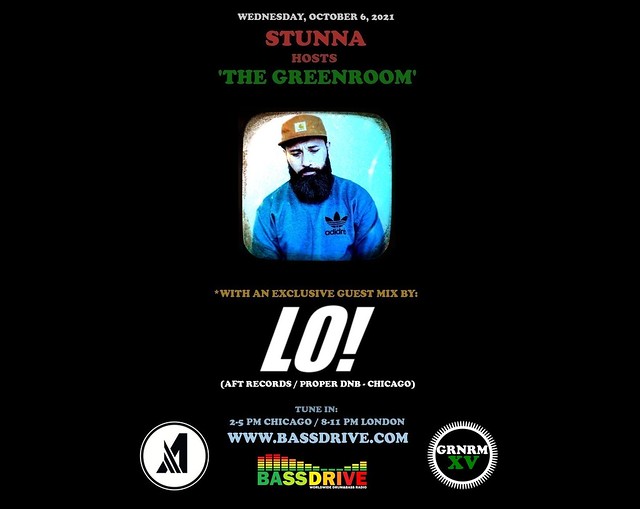 On WEDNESDAY, OCTOBER 6th, STUNNA kicks off a new, action-packed month of broadcasts in 'THE GREENROOM' on BASSDRIVE Radio. In this week's session, STUNNA welcomes seasoned DJ and burgeoning producer LO! to the show for a debut guest mix created exclusively for this program.

LO! began his DRUM+BASS music career during the mid '90s in BOSTON. DJing with both the 4 FRONT RECORDS and ELEMENTS crews, LO! cemented his place in the scene with his signature quick blends, seamless transitions and a primary focus to take his crowds on a musical journey. The CHICAGO native was also co-host of the renowned PROJEKT 3 DnB Radio Show in CAMBRIDGE, where he hosted countless UK and STATESIDE heads for exclusive, after-hours mixes from 1999-2003.

After literally decades in the game, LO! now resides back in CHICAGO as a budding producer and holds a weekly residency with the PROPER DnB crew. Splitting his time between the STATES and UK, he at long-last broke out in 2020, when linking with BRISTOL, UK’s AFT RECORDS for what have now become his first 3 UK-based releases. With his recent debut on BRISTOL, UK’s RUN TINGZ TV, and positive support of his tracks from the likes of RAY KEITH, MC CARASEL, DAZEE, NICKY BLACKMARKET, DILLINJA, BENNY V, BAILEY and many more global players, LO! is making waves as one of the more exciting producers on the rise today.

Join us this installment of 'THE GREENROOM' as LO! unveils a special guest mix featuring his own creations alongside some of his favorite selections doing the rounds worldwide. Tune in!

**For more information on LO!, visit: