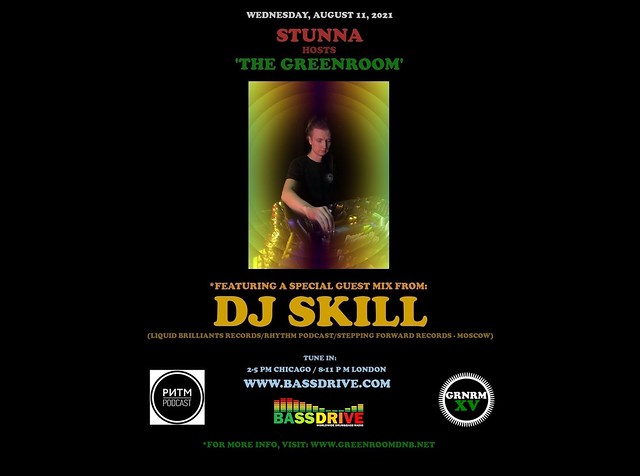 On WEDNESDAY, AUGUST 11th, STUNNA presents another special edition of 'THE GREENROOM' on BASSDRIVE Radio. During this week's session, we're treated to a debut guest mix from the DRUM+BASS artist known as DJ SKILL.

Initially launching his career as a DJ in 2005, MOSCOW, RUSSIA-based producer and DJ SKILL also threw is hat into the production ring in 2012, releasing the track "ULTRA PIANO" on the LIQUID BRILLIANTS label out of RUSSIA. In 2013, he releaesd an EP on LIQUID REC FAN entitled 'REVIVAL.' That same year, he released a pair of tracks on U.S.-based STEPPING FORWARD RECORDS. His music has seen positive suppor and heavy play from artists such as COSMOLOGY, TOKALOSH, JAYBEE, and many others. DJ SKILL is the founder of the NIGHT LIGHTS promo group, as well as co-founder of the internationally-recognized RHYTHM PODCAST series of DRUM+BASS guest mixes.

Join us this week in 'THE GREENROOM' as DJ SKILL presents an exclusive guest mix featuring some of his favorite tracks doing the global rounds. Tune in!