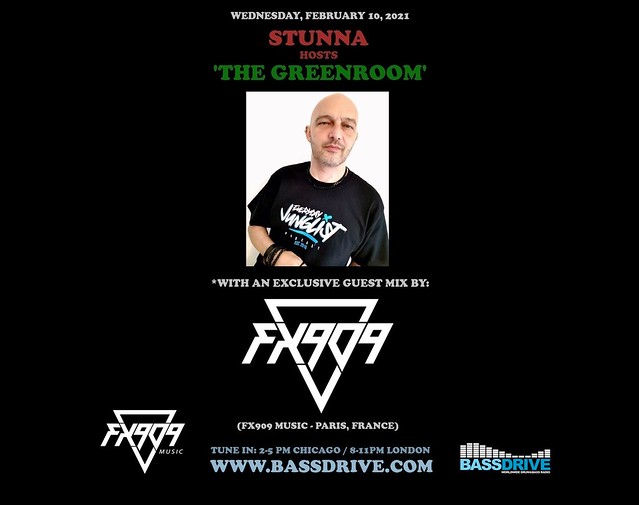 On WEDNESDAY, FEBRUARY 10th, STUNNA presents another special edition of 'THE GREENROOM' on BASSDRIVE Radio. In this week's installment, we turn our attention to one of DRUM+BASS music's finest talents and are treated to an exclusive guest mix from: FX909.

Hailing from cultural hub PARIS, FRANCE, FX909 began as a production project manned by ALEXANDRE L. Originally immersed in the TECHNO scene in the mid-1990s, ALEX became one of the leaders of the FRENCH D+B scene at the beginning of the new millennium in 2000. His music productions and duet appearances with RADIO NOVA's DJ VOLTA gained more exposure and positive media attention throughout the country. With multiple appearances in clubs, festivals, radio shows, and magazines, FX909 further defined his vision and signature sound within the global DRUM+BASS scene, as well as honed his production techniques in the studio domain.

Fast forward to 2021, and ALEX has spent the past few years relaunching and reinvigorating his FX909 production moniker with a vengeance, on such labels as AMPHIBIOUS AUDIO, CELSIUS, FOKUZ, INFLUENZA MEDIA, JAZZSTICKS, KOS.MOS MUSIC, LIQUID DROPS, LIQUID DRUM AND BASS FOR ATUSIM, LIQUID FLAVOURS, OMNI MUSIC, SHEER VELOCITY, SMOOTH N GROOVE, SOUL DEEP, SUPER LIT, TRIBE OF DUB and VOYAGE MUSIC. With over 100 tracks released in 2020 alone, the prolific PARISIAN recently unveiled his own FX909 MUSIC label. A vehicle to release his original tracks as well as upcoming and established artists, such as IMPRESSION, INSIDEMAN, JazzInspired, and TEKNICAL, be on the lookout for more great music forthcoming on the burgeoning imprint.

Join us for this special session of 'THE GREENROOM' as FX909 makes a return appearance armed with a brand new, exclusive guest mix created specifically for this broadcast. Tune in!