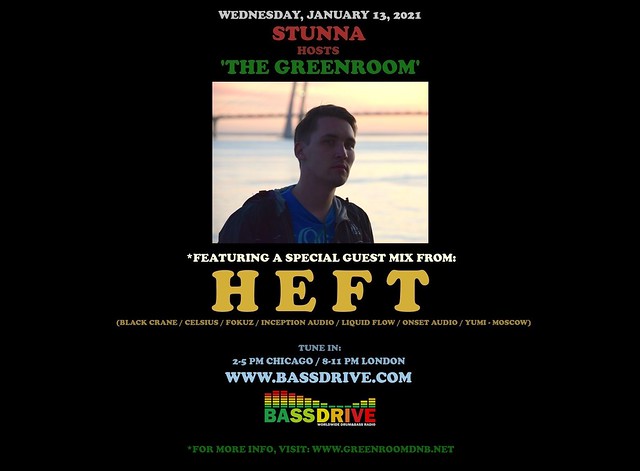 On WEDNESDAY, JANUARY 13, 2021, STUNNA hosts another new edition of 'THE GREENROOM' on BASSDRIVE Radio. During this week's session, we're treated to a special guest mix from producer-on-the-rise HEFT, as he makes his inaugural appearance on the show.

MOSCOW, RUSSIA-based producer/DJ HEFT (aka ALEX PAVLOV) started his burgeoning career in DRUM+BASS music as recently as 2017. In a relatively short span of time, HEFT has showcased the fruits of his work in the studio domain on a number of revered labels, such as: BLACK CRANE, CELSIUS, FOKUZ, INCEPTION AUDIO, LIQUID FLOW, ONSET AUDIO, and YUMI RECORDINGS. Focused on the lighter, more atmospheric sides of D+B, and influenced by the sounds of ALIX PEREZ and KID DRAMA, HEFT's evolving talent is making global waves with new signings as well as a debut vinyl release scheduled in the coming months.

Join us this installment of 'THE GREENROOM' as HEFT delivers a brand new guest mix created especially for this week's program. Tune in!


*For more information on HEFT, visit: