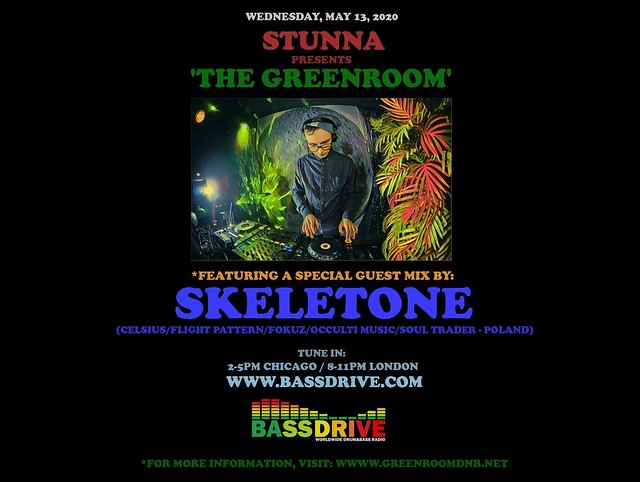 On WEDNESDAY, MAY 13th, STUNNA presents another special installment of 'THE GREENROOM' on BASSDRIVE radio. In this week's edition, seasoned DJ and producer SKELETONE presents a guest mix created exclusively for this week's broadcast.

POLAND-based artist SKELETONE (aka ROBERT PACHOLSKI) began his adventure in DRUM+BASS music in 2005, when he passionately savored the sound of artist such as PHOTEK, RONI SIZE, 4HERO, OMNI TRIO, EZ ROLLERS, MARCUS INTALEX, CALIBRE, and DILLINJA. Yet, his interest in the wide world of music began much earlier. SKELETONE's musical passions began at an early age and spawned a love for SOUL, FUNK, and JAZZ (especially, POLISH JAZZ). These initial musical exposures led SKELETONE on a hunt for obscure samples to add to his growing production library. Captivated by the DRUM+BASS music world's seemingly endless possibilities in sound design, sample usage, and genre-bending capabilities, SKELETONE began creating his own tracks as well as teaming up to produce with fellow countryman SILENCE GROOVE. The joint force effort resulted in their debut for SOUL DEEP RECORDINGS in form of the 'LOVE YOU LOSE' EP in 2012. Two years later, his first solo EP emerged as the 'LAST DAYS' EP for THINK DEEP RECORDINGS and was met with critical acclaim. Vinyl releases followed as well as further successful offerings for the likes of CELSIUS RECORDINGS, FLIGHT PATTERN RECORDS, INFLUENZA MEDIA, OCCULTI MUSIC, and SOUL TRADER RECORDS. Just recently, his brand new 'PILLOW' EP was released courtesy of his own BANDCAMP page. Be sure to look out for more great music from gifted producer SKELETONE in 2020 and beyond.

Join us for this session of 'THE GREENROOM' as SKELETONE presents a special guest mix featuring some of his favorite tracks thru the years. Tune in!


*For more information on SKELETONE, visit: