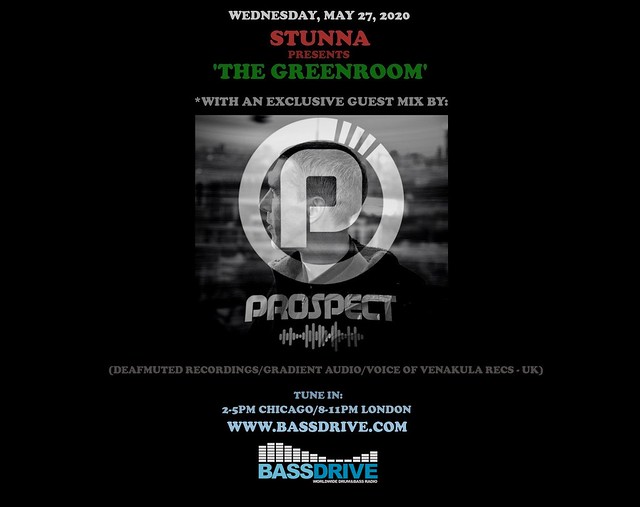 On WEDNESDAY, MAY 27th, STUNNA closes out another month of programs in 'THE GREENROOM' on BASSDRIVE radio. In this week's installment, we're treated to a special guest mix from DJ and producer on the rise PROSPECT, as he makes his debut appearance on the show.

Initially drawn to the enthralling sounds of JUNGLE music on LONDON's PIRATE RADIO stations in the early 1990s, PROSPECT obtained a pair of TECHNICS 1210s and began his journey as a DJ in the mid '90s. Intrigued by the futuristic soundscapes of DRUM+BASS music by the likes of DJ TRACE, ED RUSH, and NICO's NO U TURN record label, PROSPECT began honing his mixing style to incorporate the deeper and darker edges of the music's sonic spectrum. Soon after teaming up with MC FLEXA, the duo sharpened their skills and eventually landed a permanent weekend slot on the legendary ORIGIN FM/UK station. Quickly garnering a positive following from their regular sets on the airwaves, the pair toured and played sets throughout the UK and EUROPE. FLEXA would eventually change his moniker to VoicemC and the duo began to throw their hats into the production ring in the mid 2000s. With initial releases on the DEAFMUTED and GRADIENT AUDIO imprints, the pair immersed themselves further into various projects within the the D+Bscene. Earlier this year, PROSPECT lent his production skills to the inaugural release on VoicemC's shiny new VOICE OF VENAUKLA imprint. The 'GRAVITY' EP features VoicemC's lyrical talents alongside seasoned producers PHILTH, MELOKI, KALM, and of course PROSPECT, to round off the solid label debut.

Join us for this edition of 'THE GREENROOM' as PROSPECT dives deep into his crates of cutting-edge DRUM+BASS and presents a fine-tuned set created especially for this broadcast. Tune in!


*For more information on PROSPECT, visit: