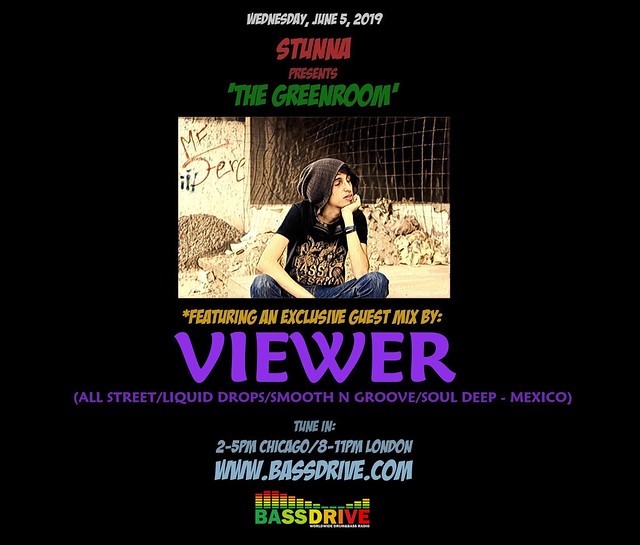 On WEDNESDAY, JUNE 5, 2019, STUNNA kicks off a brand new month of programming with a special edition of 'THE GREENROOM' on BASSDRIVE radio. In this week's installment, we're treated to the debut guest mix from rising DRUM+BASS talent VIEWER.

GUANAJUATO, MEXICO-based producer and DJ VIEWER (aka EDWART ZERMEñO) has made quite a name for himself in the worldwide D+B community the past few years. As a member of the BASS SQUAD crew, VIEWER has lent a hand and contributed to the MEXICAN bass music community. He has also found time to collaborate with like-minded producers from around the world, such as: A.K.A, mSdoS, SCOTT ALLEN, PAINTED SKIES, MIV, CILAND, and PERON. With an impressive discography on the likes of imprints including ALL STREET RECORDINGS, DNBB, LIQUID DROPS, LowFreqMX, SMOOTH N GROOVE, SOUL DEEP and W10, 2019 sees VIEWER as a burgeoning young talent with firm support from LTJ BUKEM, DANNY WHEELER, and many more top tier acts.

Join us this broadcast as VIEWER unveils an exclusive guest mix featuring many original tracks, collaborations, and forthcoming material. Tune in!

*For more info on VIEWER, visit: