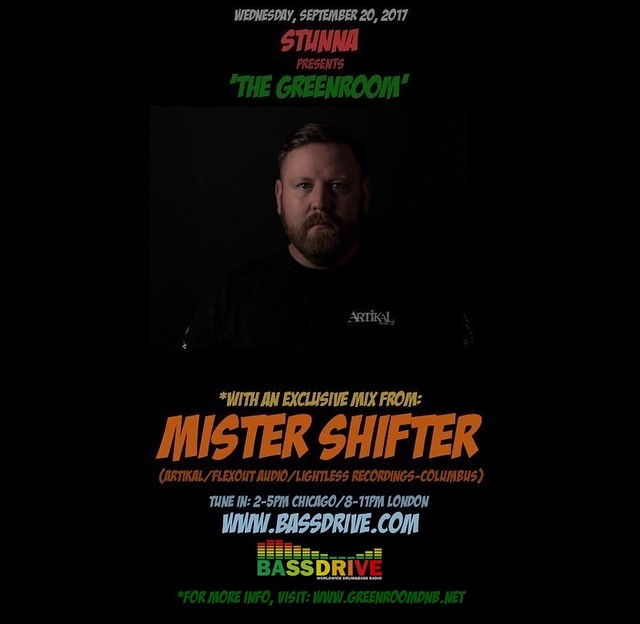 On WEDNESDAY, SEPTEMBER 20, 2017, STUNNA presents a special installment of 'THE GREENROOM' on BASSDRIVE Radio. In this week's broadcast, we're treated to a guest mix from seasoned U.S.-based DJ and producer MISTER SHIFTER as he unveils an exclusive set created especially for this show.

OHIO-based MISTER SHIFTER (aka JACK SHEETS) has been a steady fixture in DRUM+BASS music for nearly two decades. Beginning in the late-nineties, MISTER SHIFTER burgeoned as a young talent in the underground rave circuit, later moving into nightclub residencies and opening for international touring DRUM+BASS acts.

In 2002, JACK and close-friend MIKE RICHARDS combined to form the duo known as RANDOM MOVEMENT, earning early international attention with with releases on ORGONE, BASSBIN, INNERGROUND and TIMELESS RECORDINGS. Their acclaimed second single, ‘STARS IN THE DARK’ was supported by the likes of DJ MARKY, FABIO, and CALIBRE, and thus propelled the duo into the spotlight for years to come. Later, JACK parted ways with RANDOM MOVEMENT to pursue a solo career as MISTER SHIFTER, beginning with a release on FANU's FINNISH-based LIGHTLESS RECORDINGS label.

Recently, MISTER SHIFTER has gained attention from industry-heavyweight J:KENZO and signed a much-anticipated 12” EP to his ARTIKAL MUSIC UK imprint which is slated to drop later this year. With further releases penned for FLEXOUT AUDIO, none60, and more revered labels on the scene, MISTER SHIFTER is poised to break out as a solo artist with years of hard work and experience under his belt. Join us this session as MISTER SHIFTER takes us on an audio journey thru some of the latest tracks fresh from his sequencer and more of his favorite music from producers around the globe. Tune in!!