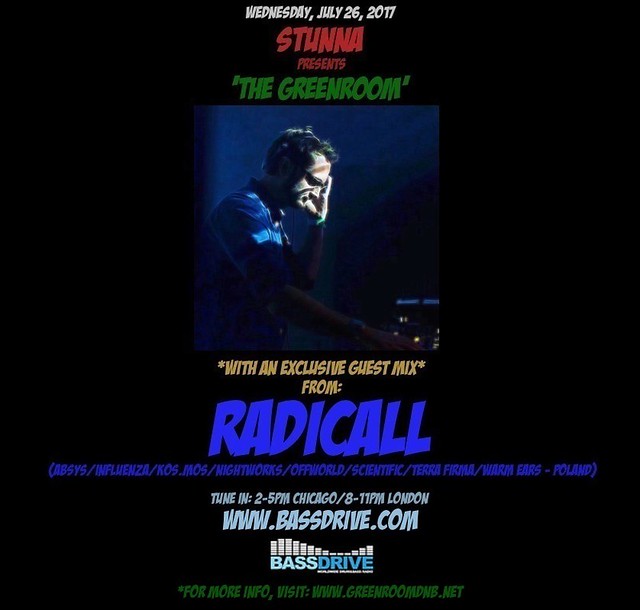 Closing out the month of JULY, 2017, on the 26th, STUNNA presents yet another very special episode of 'THE GREENROOM' on BASSDRIVE Radio. Talented producer and DJ RADICALL makes his long-awaited return appearance to the program.

Based in POLAND, RADICALL (aka KRZYSZTOF GOLINSKI) is a gifted DRUM+BASS producer with many years experience under his belt. His breakthrough year into the arena came in 2007 with releases on legendary Atmospheric label COVERT OPERATIONS. He became a top DJ in his home country of POLAND and saw releases on such labels as DRONE AUDIO, RED MIST, LEVITATED, OFFWORLD, and his own NIGHTWORKS MUSIC imprint. RADICALL has released a pair of albums on the ABSYS RECORDS label: "EMOTIVE" (2010) and "GHOST NOTES" (2015). His music is a combination of energetic, techy, electro mixed with a healthy dose of melodic atmospherics. 2017 has been quite a successful year for RADICALL, as he's seen releases on esteemed labels such as ABSYS, SCIENTIFIC RECORDS, KOS.MOS MUSIC, TRANSFERENCE, INFLUENZA MEDIA, WARM EARS, and TERRA FIRMA. Currently experiencing a newfound wave of creative energy and vitality, watch out for plenty more forthcoming music from RADICALL in the coming months ahead.

Join us this session as RADICALL presents an exclusive guest mix crafted especially for this week's edition of 'THE GREENROOM.' Tune in!!

*For more information on RADICALL, visit: