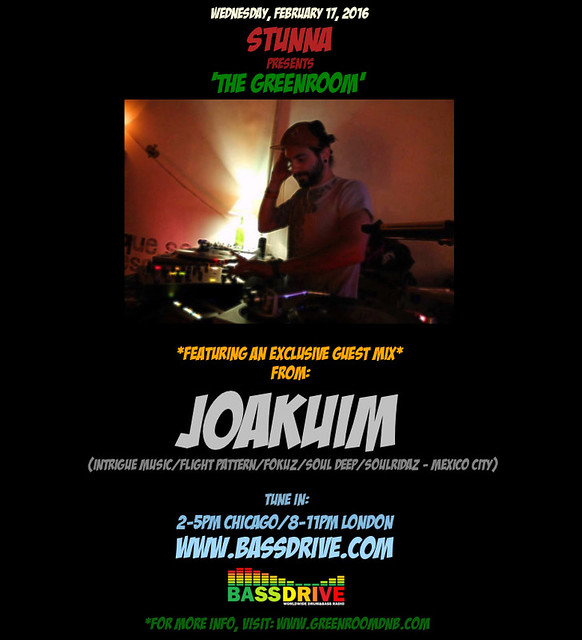 As the cold winter months move onward, things are just heating up on the airwaves. On WEDNESDAY, FEBRUARY 17, 2016, STUNNA presents another special installment of 'THE GREENROOM' on BASSDRIVE Radio. In this edition, we're treated to an exclusive guest mix from the exceptionally talented producer and DJ known as JOAKUIM.

Born and raised in the country of FRANCE, and now residing in MEXICO, JOAKUIM's introduction to electronic music began over a decade ago. With initial exposures to underground rave parties and TECHNO music, he was fascinated by the myriad of textures of sound found in the DRUM+BASS genre and began producing his own tracks. After a brief stint in the music's birthplace of LONDON, immersing himself in the sights and the sounds of the culture, JOAKUIM decided to set his coordinates to MEXICO CITY and is currently hard at work in the studio on a number of different musical projects.

Join us this week as JOAKUIM presents a special guest mix created exclusively for 'THE GREENROOM.' Tune in!!

**For more information on JOAKUIM, visit: