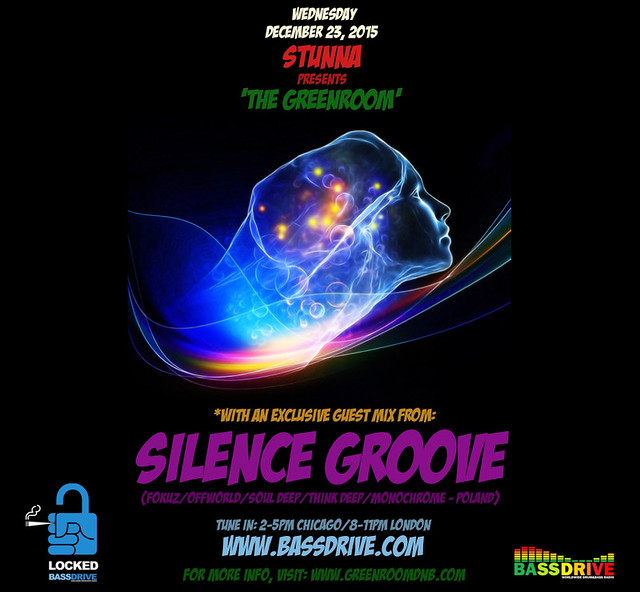 On WEDNESDAY, DECEMBER 23, 2015, STUNNA presents another exclusive installment of 'THE GREENROOM' on BASSDRIVE Radio. In this week's edition, we celebrate the talented young producer known as SILENCE GROOVE as he unveils a special guest mix in support of his brand new 'FOREVER BELIEVE' EP landing DECEMBER 21st courtesy of the legendary OFFWORLD RECORDINGS label.

Born and bred in the Central European country of POLAND, SILENCE GROOVE's love of electronic music began at an early age when his father introduced him to the intriguing sounds of KRAFTWERK, VANGELIS, and TANGERINE DREAM. In 2010, at the age of 18, he signed his first PROGRESSIVE TRANCE EP titled 'SHINY SNOW' to UNEARTHED RECORDINGS. His initial work in the TRANCE music scene garnered rave reviews, international exposure and recognition from scene luminaries PAUL VAN DYKE, ANDY MOOR, MATT DAREY, and ARMIN VAN BUUREN.

In 2011, he was inspired by the innovative sounds of producers FUTURE ENGINEERS, ARTIFICIAL INTELLIGENCE and ELECTROSOUL SYSTEM to take his first steps into throwing his proverbial hat into the DRUM+BASS production ring. Collaborating with fellow countryman SKELETONE, the pair released their debut 'LOVE YOU LOSE' EP on the revered SOUL DEEP RECORDINGS imprint and followed up with successful offerings for the BASSDRIVE TUNES and OFFWORLD RECORDINGS music labels. With a prolific number of various digital and vinyl releases chalked up over a relatively short period of time, SILENCE GROOVE's evolution as a gifted producer with a penchant for beautiful melodies and an ear for detail becomes fully realized as he closes out 2015 with an exquisite 4-track set in form of the 'FOREVER BELIEVE' EP (OFFWORLD RECORDINGS).

Join us this session as SILENCE GROOVE presents a special mix in support of his 'FOREVER BELIEVE' EP and showcases his talents behind the decks. Tune in!!!