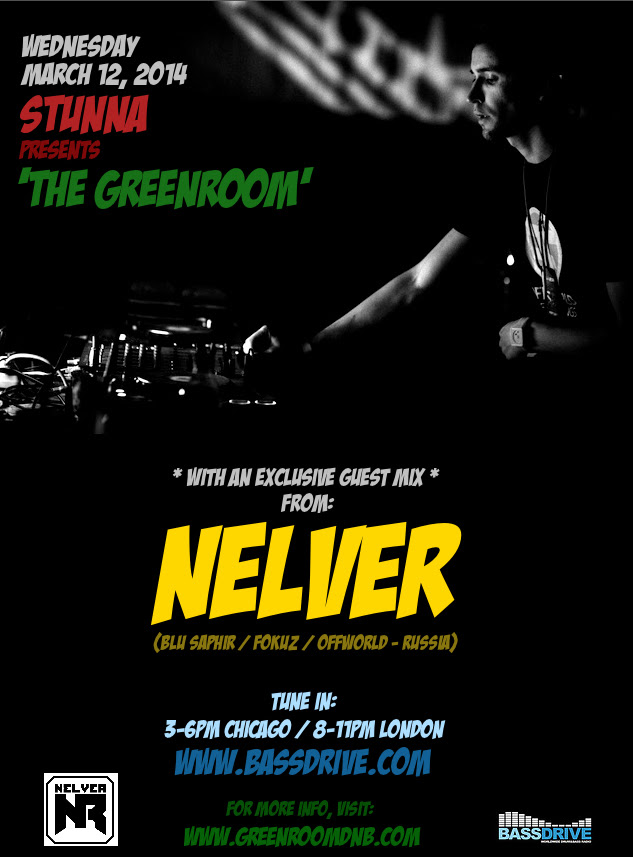 On MARCH 12, 2014, STUNNA presents another very special edition of 'THE GREENROOM' on BASSDRIVE radio. On this installment, he features a guest mix from one of his personal favorite producers and DJs. No stranger to regular airplay on both 'THE GREENROOM' and various BASSDRIVE programs, please welcome the inimitable sounds of: NELVER.

Born in the provincial RUSSIAN town of BRYANSK in 1989, NELVER was schooled in piano from an early age and was instantly enamored with the beautiful sounds emanating from the classical instrument. With a true love for musical composition and its endless array of exploratory possibilities, in 2004, NELVER developed a fascination with electronic music. After much experimentation with various beat structures and tempos, he found that the DRUM+BASS genre best suited his artistic style of production.

In the past decade, NELVER has refined his signature sound and caught the ears of various worldwide radio stations, producers, and labels alike. With strong productions released and forthcoming on global labels such as BLU SAPHIR, FOKUZ, OFFWORLD, CELSIUS, GOOD LOOKING, SOUL DEEP, ONE SIZE, INTELLIGENT, OCCULTI, SCRIPTURE, KILL INC, PLUSH, INFLUENZA and many more, NELVER has truly established himself as one of shining lights in the upper echelon of producers in modern DRUM+BASS music. Join us as we're treated to a blend of both upfront sounds from producers around the world as well as the latest creations fresh from NELVER's lab. Tune in!!

**For more information on NELVER, visit: