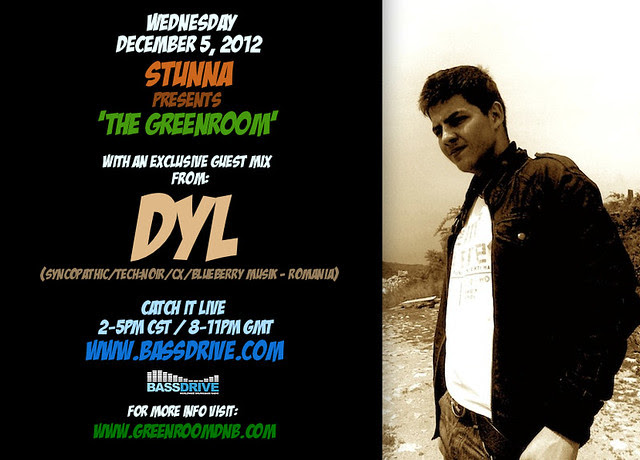 On DECEMBER 5, 2012, STUNNA presents another very special edition of 'THE GREENROOM.' For this installment, we head all the way to DEVA, ROMANIA where we discover a fresh new talent emerging on the scene. Having only begun producing music professionally since JANUARY, 2012, the artist known as DYL has already made himself a solid fixture within many a 'GREENROOM' set this year. With global support of his creations from the likes of LOXY, GREMLINZ, SUB, CUELOCK, and many more versatile and adventuresome figures, DYL has also busied himself with collaborating with boundary-pushing producers such as BEAT 70, MARUKOMU, and VRH. With a host of releases lined up for imprints such as SYNCOPATHIC, TECH:NOIR, CX, BLUEBERRY MUSIK, BEAT 70 MUSIC, POINT, MONOCHROME, and TYTANIUM ARMOUR, things are just starting to heat up in the budding career of DYL.

Tune is as we're treated to an exclusive guest mix from DYL featuring a number of his own productions as well as plenty of fresh sounds from like-minded producers pushing the deeper and more abstract ends of the DRUM+BASS spectrum.


For more info on DYL, visit:

• DYL on SOUNDCLOUD
• DYL on MYSPACE
• DYL on TWITTER